No matter how prepared you are, labor and delivery is one experience that can catch every mom off guard in some way or another. Even if you’re not a first time mom, it’s easy for things to go down in a totally different way than you expected.

Despite the fact that I had thoroughly researched birth prior to my delivery, there were still things that happened that I didn’t expect during labor.

Even though there were things I didn’t expect during labor and delivery, the fact that I had prepared myself ahead of time helped me to remain calm during the parts that I wasn’t expecting. 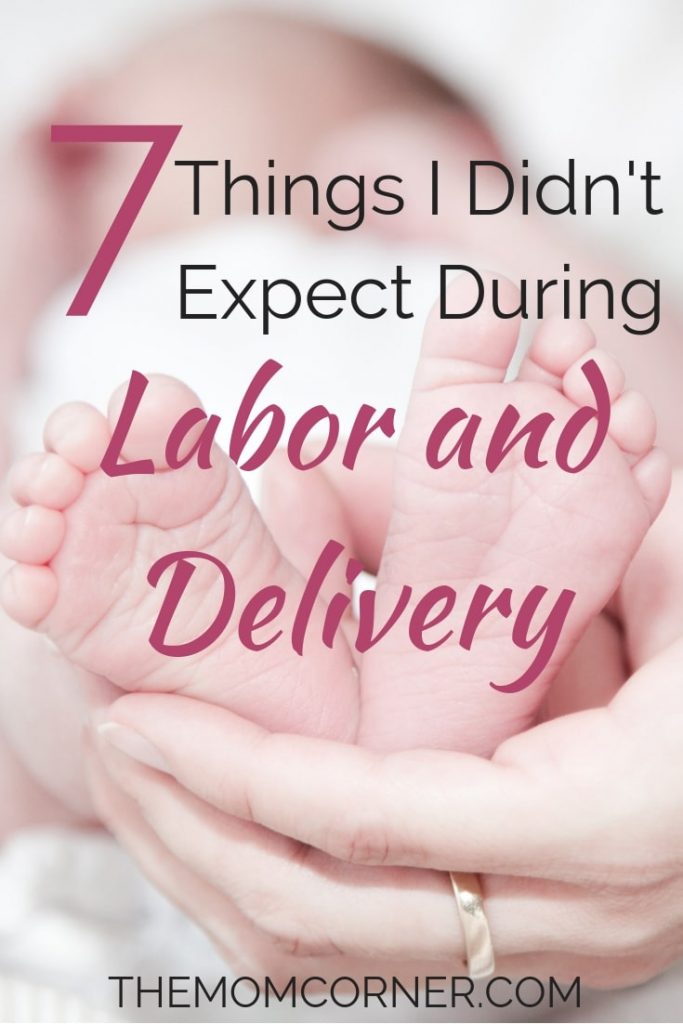 7 Things I Didn’t Expect During Labor and Delivery

The Level of Pain

….Or rather, the lack thereof. To be completely, perfectly honest, my labor pain was not very high. I’ve definitely had worse pain from periods than I did from labor and delivery (sorry for the TMI). Now, while that may not be true for everyone, it was for me. Which, frankly, completely went against what everyone had built it up to be.

Granted, I do have a high pain threshold, so that may have had something to do with it. But during my pregnancy everyone kept talking it up like it was the worst pain on the face of the planet. And maybe it was for some. It just wasn’t the case for me. When it came down to it, I ended up being surprised that it didn’t hurt more than it did.

Frankly, the IV hurt more than the labor itself.

The Level of Pressure

Now, while my pain level was far lower than I had been built up to expect, what I had that I didn’t expect was a lot of pressure. The pressure of the contractions didn’t really hurt, but it made my whole stomach feel ridiculously tight.

So tight that, when things started picking up more, it got to the point that I felt like I couldn’t breath well. I could–there was nothing physically stopping me from breathing however I wanted. But the pressure made it feel like it was hard to take a good breath.

But really, how many pregnant women have breathed well since their baby got big enough to take over their rib cage and squash their lungs?! 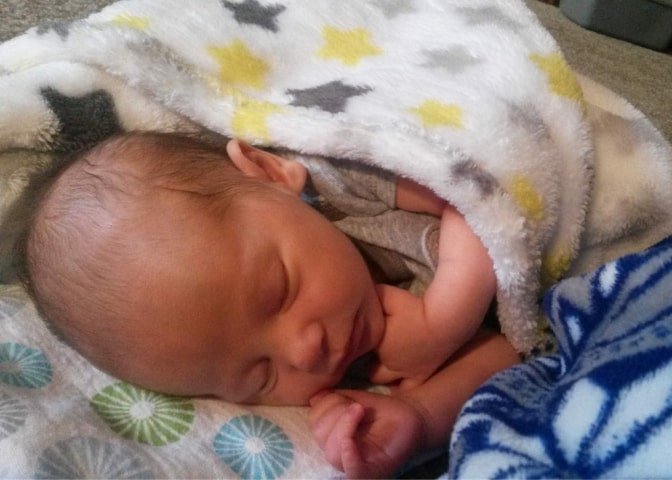 Inducement to Cause Nonstop Contractions

Right on the heels of the pressure I experienced, I didn’t expect my induced labor to trigger nonstop contractions. A week after my due date, I was scheduled to be induced. Since Elijah decided he was perfectly happy to stay snuggled inside my stomach, we ended up at the hospital where they hooked me up to a Pitocin-laden IV.

Once the contractions started really picking up, it seemed to morph into a never ending contraction. It seriously felt like one big, long contraction that just never stopped.

Even the contraction monitor didn’t look like there was ever really an actual pause between them. To this day I have no idea how my nurse knew when I was in the middle of a contraction. It all looked and felt the same to me.

This part was really the kicker for me. The pain (what little I had) and the pressure didn’t bother me too much, but not having a break did. Towards the end I did end up asking for an epidural, but only so that I could feel like I could breath again and have some semblance of a break. Once it kicked in, the nonstop contraction(s) stopped being an issue.

Related: How to Make the Perfect Birth Plan

Having No Clue Whether I Pooped or Not

Another thing I didn’t expect during labor was to have no clue whether I pooped or not. During my labor and delivery research while I was pregnant, I learned that it is common for laboring women to poop while giving birth.

There’s really nothing that can be done about this. It just so happens that the same muscles you use to poop are also the same ones you use to push a baby out. So, to the horror of most women, a lot of women end up pooping in a room full of family, friends, doctors, and nurses while they deliver their babies.

Yes, it’s gross. But, by the time I delivered, I had come to terms with the fact that it was probably going to happen. I was probably going to feel awkward about it, but we’d all move on. However, when it came down to it, I honestly have no clue if it ever happened. Nobody said anything about it, and I never asked. To be honest, I’m okay with that.

To Be Okay with Puking

Let me tell you something: I absolutely hate throwing up. Even if I feel like total crap and throwing up would probably help, I’ll still fight the urge/need to puke as long as humanly possible. I didn’t expect during labor to throw up as regularly as I did, and I didn’t expect to be okay with it.

Apparently, it is common to get nauseous from an epidural. That was one fact that escaped my extensive pre-labor research. Within a few minutes of getting my epidural, I got sick. After that, I puked about every other contraction.

Oddly enough, I was okay with it. I didn’t actually feel sick. Just something about the epidural and the contractions made me suddenly nauseous. Once I had puked, I felt fine and we carried on. (If you’re worried about puking, no worries, they give you a special puke baggy so you don’t get it all over you)

The Sensation of Contractions After an Epidural

Contractions are a funny thing to try to describe. It’s difficult to pin down exactly what they feel like in order to describe them. It’s just something you sort of know and understand once you’ve experienced it. What’s even weirder to try to describe is a contraction after having an epidural.

It had never occurred to me that my contractions after my epidural would feel any different than before it. I thought it just wouldn’t hurt after, but would generally feel the same. Part of it might be the degree to which my epidural seemed to work.

Apparently, I’m a major lightweight when it comes to pain meds. All the anesthesiologist had to do was set it up, push the button three times to test it, and I was majorly numb for the next nine hours. That being said, I really couldn’t feel my contractions after my epidural. Instead, it felt like a super weird, warm rush across my stomach. Which, also made me sick every other one. Go figure.

Read: What No One Told Me About PostPartum

Not Feel the Baby Come Out

Lastly, even with an epidural, I didn’t expect during labor to not be able to feel the baby coming out. Now, I’m not particularly upset about this–it wasn’t something I specifically wanted to feel. I just sort of assumed I would be able to feel it and know when it was over with.

Nope. I didn’t know until all of a sudden the doctor lifted up my baby and handed him over to the nurses/pediatrician. It happened sooner than I had been anticipating so it sort of caught me off guard. Plus, for some odd reason it hadn’t occurred to me that his little limbs would be flailing about. It was kind of a weird moment for me.

Were there things you didn’t expect during labor and delivery? Share with me in the comments below–I’d love to hear from you! 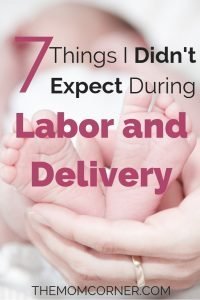 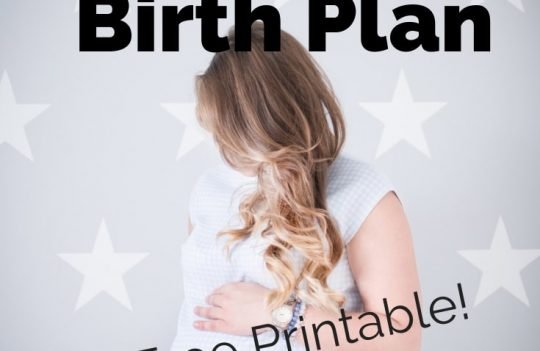 How to Make the Perfect Birth Plan 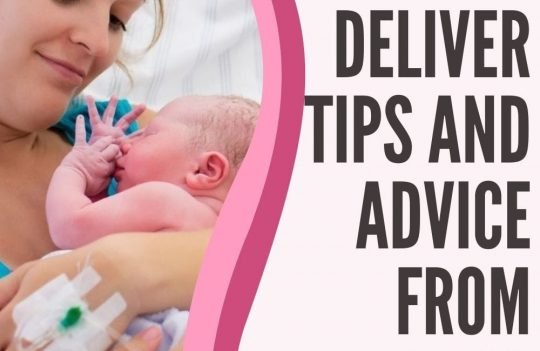 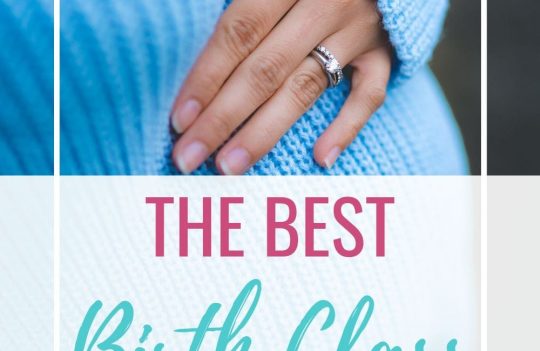 The Best Online Birth Class And Why You Need It
Next Post:
Cute Baby Names for Boys and Girls
Previous Post:
6 Easy Ways For Moms To Make Extra Money

Soo hard to get a good pic with this little squirt

I'm really not a political person. And I really do

Introduction time! . I realized the other day that

I think sometimes (read: a lot of times) as moms w

As moms, we spend so much of our time watching our

This website uses cookies to improve your experience while you navigate through the website. Out of these, the cookies that are categorized as necessary are stored on your browser as they are essential for the working of basic functionalities of the website. We also use third-party cookies that help us analyze and understand how you use this website. These cookies will be stored in your browser only with your consent. You also have the option to opt-out of these cookies. But opting out of some of these cookies may affect your browsing experience.
Necessary Always Enabled
Necessary cookies are absolutely essential for the website to function properly. This category only includes cookies that ensures basic functionalities and security features of the website. These cookies do not store any personal information.
Non-necessary
Any cookies that may not be particularly necessary for the website to function and is used specifically to collect user personal data via analytics, ads, other embedded contents are termed as non-necessary cookies. It is mandatory to procure user consent prior to running these cookies on your website.
SAVE & ACCEPT
119 Shares
Tweet
Pin
Share